In 2012 an archaeological team from the University of Copenhagen began investigations at the twin sites of Bab-w-Kur in northeastern Iraq. The site of Bab-w-Kur is located on the Rania Plain in the western foothills of the Central Zagros mountains, in the Sulaimaniyah province, Kurdistan Regional Government, Iraq (Figure 1). 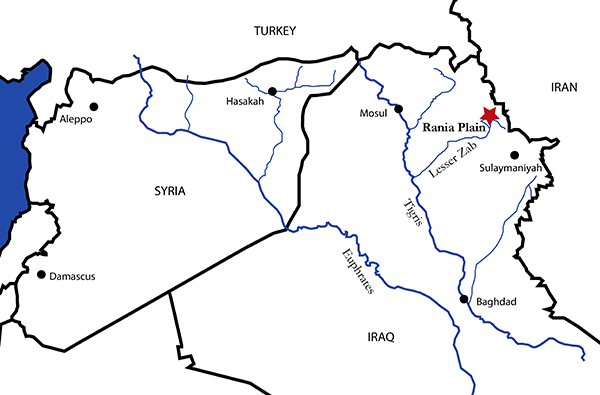 Today the site lies within the flooding zone of Lake Dokan. This means that the mounds are flooded every year during springtime when the snow in the Zagros mountains melts. As the name suggests Bab-w-Kur comprises two mounds separated from each other by approximately 300 m (Figure 2). 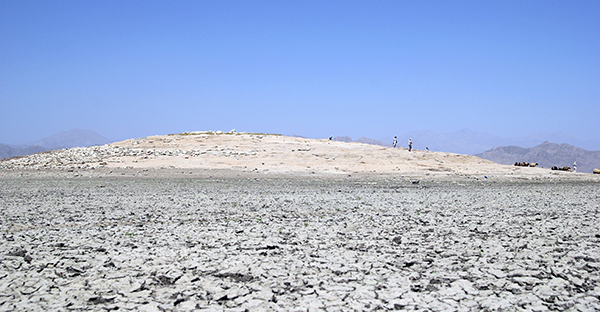 Previous survey work in the 1950s by Behnam Abu Al-Souf recorded occupation at Bab-w-Kur (then known as Babu-Gawran) for the prehistoric, Assyrian and Median periods. Our preliminary surface inspections in the autumn of 2012 suggest that both mounds have extensive Late Chalcolithic occupation, as well as an occupation in earlier periods (Ubaid period) and later periods (possibly late Iron Age and Islamic periods).

Although investigations concentrated on Bab-w-Kur, preliminary inspections of the immediate surroundings of the site were also initiated. During this work, two additional mounds were identified within a 600m radius of Bab-w-Kur. The most notable is located approx. 600m to the east of Bab-w-Kur. Today called Lower Warankah and is probably one of the Warankah mounds indicated on Abu Al-Souf’s survey map. Large amounts of pottery dating to the Halaf period together with surface remains of later periods including Islamic periods were recovered from this site.

To the south of Bab-w-Kur, we identified Bab-w-Kur South (N36,15768, E044,89964): a site not on Abu Al-Souf’s survey map. It is a low and small mound and possibly less than a hectare in size. Taking into consideration the proximity of this mound to Bab-w-Kur, it is likely these three mounds formed a closely related settlement complex with complimentary occupational periods.

It was obvious from our first visit in September 2012 that Bab-w-Kur was an extraordinary site. A quick inspection and collection of material made it clear that both mounds of Bab-w-Kur had been extensively occupied in the Late Chalcolithic period.

The morphology of Bab-w-Kur has been radically altered by the seasonal flooding of the area by the Dokan Lake each spring. It is beyond doubt that Bab-w-Kur and other sites on the Rania Plain suffered from being flooded in the 1950s when the dam was constructed. The most destructive events take place during spring and again in the autumn when the Lake Dokan retreat and advances and exposing the sites along the lake’s shoreline to damaging wave action. 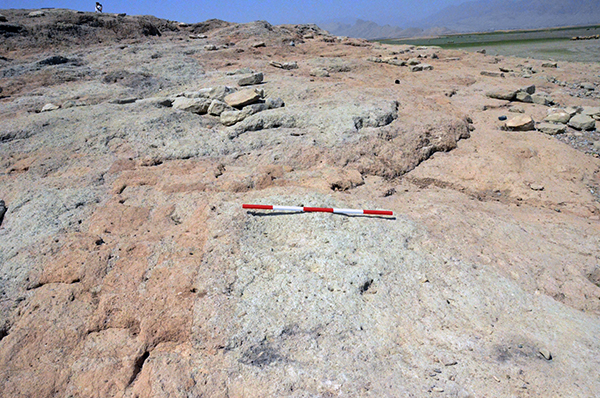 Currently at Bab-w-Kur, and which also holds true for other sites along the lake, the surface soil and archaeological deposits are being displaced: washed off large parts of the mounds. On the slopes to the west and northwest of Bab (the largest of the two mounds), large tumbled limestone blocks are found that may belong to a now destroyed Iron Age or Islamic period building. At the north-western base of the mound is a low spur of sand and eroded cultural deposits as well as thousands of washed potsherds. This spur is clearly made up of displaced deposits of archaeological material from the mound itself. Further displaced deposits of archaeological material are also clearly evident along the slopes of the site. 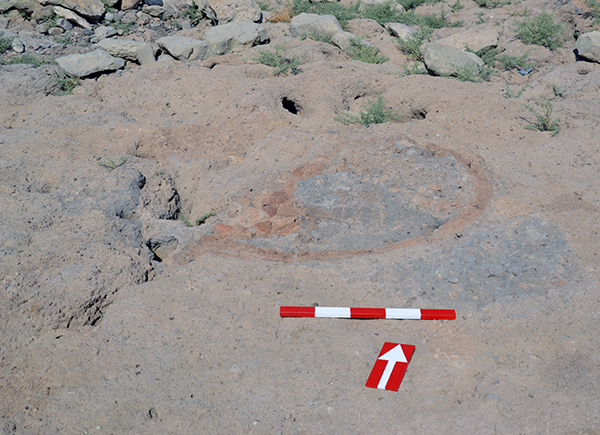 Exposed Late Chalcolithic architecture, such as a section of a large wall that seems to surround the mound, are visible across the mound. Other visible remains include wall segments of tripartite buildings abutting the perimeter wall and many pottery kilns, pits and in situ pots (Figures 3-5). 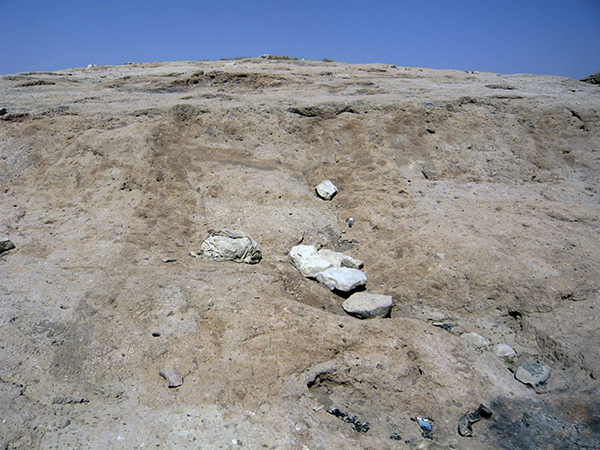 Investigations at Bab-w-Kur in autumn 2012

Our initial work at Bab-w-Kur aimed to investigate the nature of the site and the archaeological remains from the Late Chalcolithic Period identified on the surface of the mound. 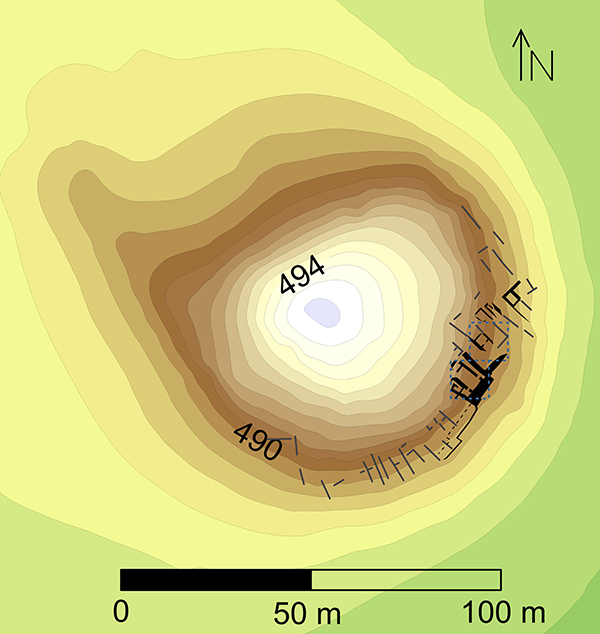 We initially documented photographically the most important architectural features and in situ finds visible on the surface of the main mound, Bab. We followed this with a topographical survey of Bab and its immediate surroundings.

We subsequently opened two trenches (Trench 1 and 2) and began surface scraping in areas adjacent to these excavation areas. To understand the later use of the mound and depositional activities we also excavated a large pit to the northwest of Trench 1.

Today Bab is a small mound about 8-9 meters in height and ca. 2 hectares in size. However, a test by coring gear at the base of the site shows that cultural deposits extend for at least 1.5 m below the surrounding plain, suggesting that the site was slightly larger in the past. A topographical survey shows that Bab-w-Kur has suffered considerably as a result of Lake Dokan. The southern and eastern parts of the mound have been especially damaged by water action. These seasonal “flood” and “ebb” events have resulted in sharp, truncated edges to the mound visible in the contour lines of the survey map. The original topography also seems to have been altered with the site changing from a regular and fairly round settlement to a rather elongated mound. It is reasonable to assume that this is a result of material from other parts of the mound being redeposited in recent years.

2a. Excavation and surface scraping 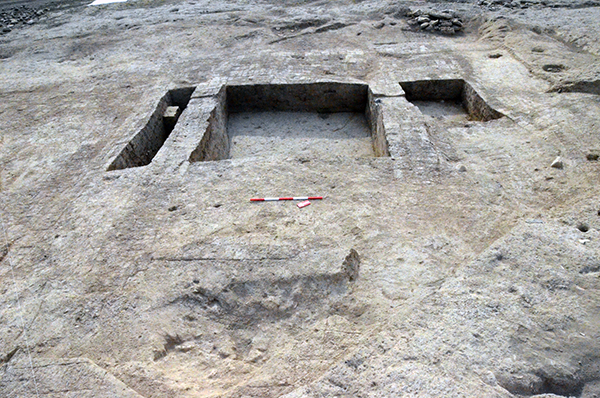 Level 3 represents a period where Bab was intensively occupied and possibly also fortified. Well preserved parts of large tripartite houses or workshops, single-room structures and a large perimeter wall were found (Figures 7 and 8). Remains of more buildings were visible on the surface to the west and east along the base of the mound (see below). Whilst it is clear that these buildings had been in use for a considerable length of time, the exact division between building phases still needs clarification. 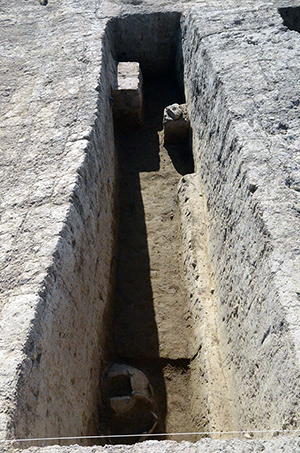 Artefacts and ceramics dating to the Late Chalcolithic 2-3 Period (4200-3700 BC) were recovered from soundings in Trench 1. Of particular interest are a stamped seal and a stamp clay sealing (Figures 9) that have parallels at Tepe Gawra and Arslantepe in Turkey.

Remains of fireplaces and pottery kilns were revealed below the floors and surfaces of the Level 3 building in Trench 1. Despite the fragmentary data, we expect that these remains may represent yet another phase of extensive production at Bab-w-Kur.

Level 2 represents a phase of extensive ceramic production at Bab-w-Kur. In spite of the fact that this phase was not well preserved in Trenches 1 and 2 and was only represented by a few pottery kilns, substantial deposits with many more kilns were identified further up the slope of the mound. In Trench 1 one pottery kiln and an associated pit were excavated. In Trench 2 several kilns were documented, but not excavated (Figure 10). Although pottery from Bab-w-Kur is still being processed our preliminary observations suggest a date of this production phase in the Late Chalcolithic 3 period (c. 3850-3700 BC). 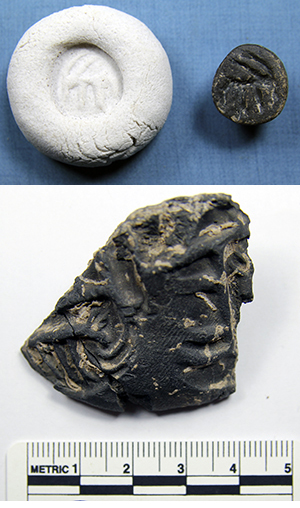 Figure 9. Stamp seal and sealings recovered from a tripartite building in Trench 1.

It was possible to gain a limited insight into Level 1 by excavating part of a large ash pit (3-4m in diameter) located above Trench 1 (Figure 11). To our surprise, this pit was only preserved to a depth of ca. 0.5m, possibly due to erosion by Lake Dokan. The pit consisted of small and fragmentary potsherds dating to the Late Chalcolithic 4-5 period (ca. 3700-3100 BC).

2b. Inspection and documentation of exposed surface features

Inspection and documentation of archaeological features exposed on the surface of Bab-w-Kur were conducted alongside the excavation project. This endeavour recorded a series of north-south-oriented structures and walls located on the lower slopes of the mound (the eastern and southern sections). Whilst some of these structures clearly represent tripartite buildings of the kind excavated in Trenches 1 and 2, a few of the structures appear to belong to composite building complexes. In addition, more sections of the perimeter wall were recorded on the lowest parts of Bab. Ceramics from these structures point towards a similar Late Chalcolithic 2-3 date as suggested for the buildings excavated in Trench 1. 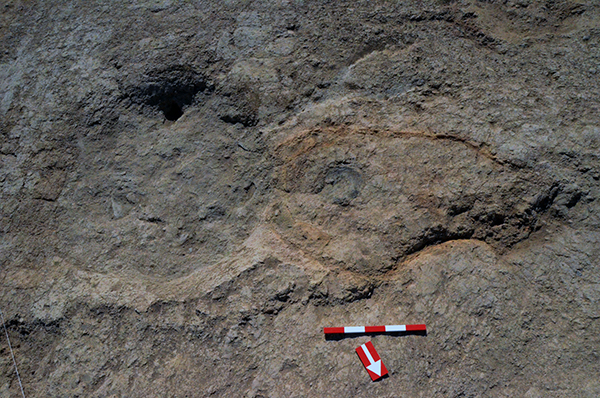 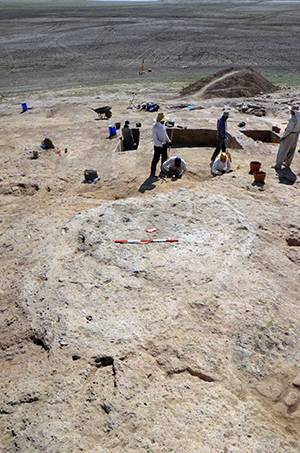 3. Preliminary studies of ceramics and other artefacts

A number of studies of archaeological remains from Bab-w-Kur are in progress:

Ceramics collected on the surface of the site suggest that occupation at Bab-w-Kur took place in the Ubaid, Late Chalcolithic, late Iron Age and Islamic periods. However, further study is needed to confirm these proposed dates.

The preliminary study of ceramic and other artefacts from small soundings within the Trench 1 building suggests a date of this building, as well as the perimeter wall, lying within the Late Chalcolithic 2-3 period (possibly Late LC2 or early LC3). This date is based on similar ceramics found at Grai Resh (Iraq), Tepe Gawra (Iraq), Tell Hamoukar (Syria), Tell Brak (Syria) and elsewhere in northern Mesopotamia.

Characteristics of this period and of Bab-w-Kur are cooking pot types like “hole mouth casseroles” and “wide flower pots”. Ceramics of southern Mesopotamian origin were not recovered from deposits within the Trench 1 building but recovered in the pits and during surface inspections of the mound.

Preliminary results of the study of ground stone tools

In total 38 ground stone tools were excavated from the building in Trench 1. These were examined by ground tool expert Anne Mette Harpelund. More than half of these tools were related to workshop activities such as pigment processing, tool manufacturing and/or tool maintenance. Eight ground stone artefacts contained traces of red to the slightly pinkish pigment that indicate an emphasis on pigment processing in this building (Figure 12). 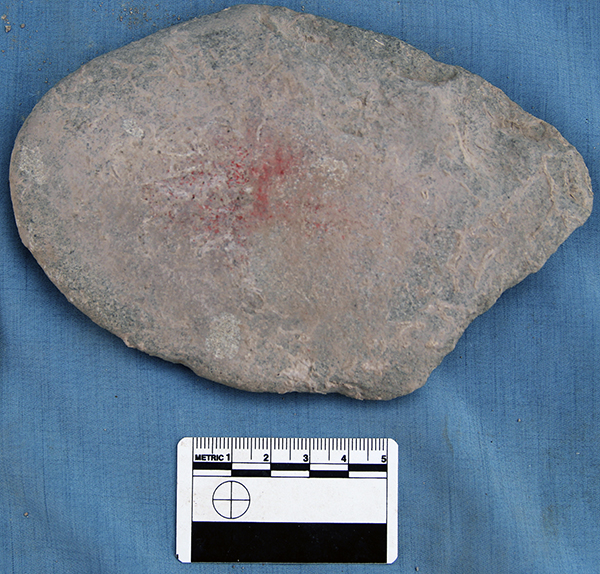 Our investigations at Bab-w-Kur demonstrate that intact and well-preserved Chalcolithic deposits are easily accessible across a large part of the mound. However, as a result of being subject to annual flooding, the archaeological remains are in danger of being damaged or destroyed in the years to come.

In light of the evidence, threats and potentially provided by investigations at Bab-w-Kur the project formulated a strategy of wider investigations, this included: excavations at Kur (the ‘son’ of the ‘Bab-w-Kur’ settlement complex) that were undertaken in the autumn of 2013, a landscape survey conducted around Bab-w-Kur that was undertaken in 2013 and the spring of 2015, and a series of small soundings on the sites in the vicinity of Bab-w-Kur that were undertaken in the autumn 2013 season. This work is detailed in subsequent reports available on this website.